How to Play Ladder Ball 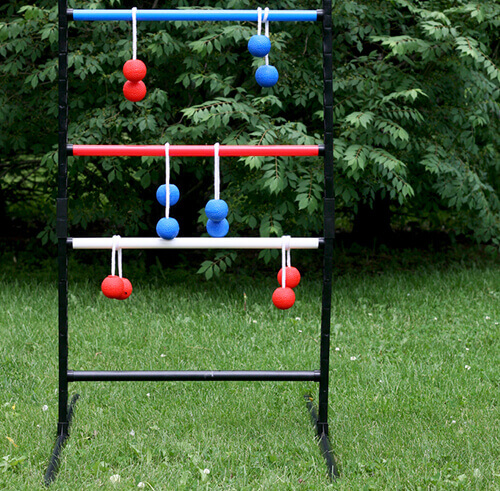 Ladder Ball, also called Ladder Golf, is a 2 or 4 player game, where players throw a Bola across the yard towards a ladder ball goal post.  Each rung that you wrap the Bola around gives you different points, depending on the difficulty of the rung.

We love a lot of different Backyard Games so Ladder Ball is no different.  Ladder ball is such a good game to play at a BBQ with family or friends. It’s easy to assemble and when collapsed, portable enough it can even be a hit at your next camping trip.

The only downside to Ladderball is most of the mainstream versions can be quite weak.  So as you are throwing the piece at the ladderball post, sometime it may break apart on you and can reassembly.  In the meantime your piece might have missed the post.

Try the game and if you like it you might find yourself wanting to build a DIY Ladderball post or buy a more heavy duty version.  Obviously then, the more heavy duty, the less portable the game becomes.

Overall, this game is still find one of our entertaining “go-tos”.  Keep reading for the rules to play.

Check the latest price of Ladder Ball online to get your own before you begin. Included in the Ladder Ball Game set is the plastic “pvc-like” piping that has connectors at each end for assembly.  You receive plastic tubes to assemble a base and an upright structure.

How to Setup Ladder ball

For setup, take the pvc piping that has round connector ends and place a straight plastic piece in each of them, take another end and place it on the other side of those sticks.  Do the same for the last remaining sticks however place the 3 horizontal pipes in the square before you connect the 2 pieces.  Once you have the 3 horizontal pipes secured then place them in the base.  Now your post will be setup.

Place each post at the opposite side of your playing area, the distance for Ladderball is approx 15 feet or 5 paces between each post.  Give each team mate or person 3 of the throwing pieces, either red or blue.

Now you are ready to play Ladder Ball.

How to play Ladder ball:

You can play this game with either 2 or 4 people.

If playing with 2 each person stands with one person on each side.  If you are playing a doubles team, you and your team mate stand opposite of each other.

Similar to how you would play horseshoes, the ladder ball rules are pretty simple.  Decide which person or team gets to go first.  That person gets to throw the Bola first at the post opposite them.  You are aiming to wrap the Bola around one of the three ladder rungs.

How to Score in Ladder ball: 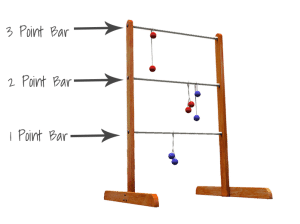 The points system works so that if each person gets 3 points it cancels out and no one gets any points.  If blue gets 3 and red gets 2, you give 1 point to team blue.

So for example:  Team blue gets 2 pieces on the lower and middle row.  Team red gets 1 piece on the top row.  Each team got 3 points in total which cancel each other out so each team is still at 0 before the next round. 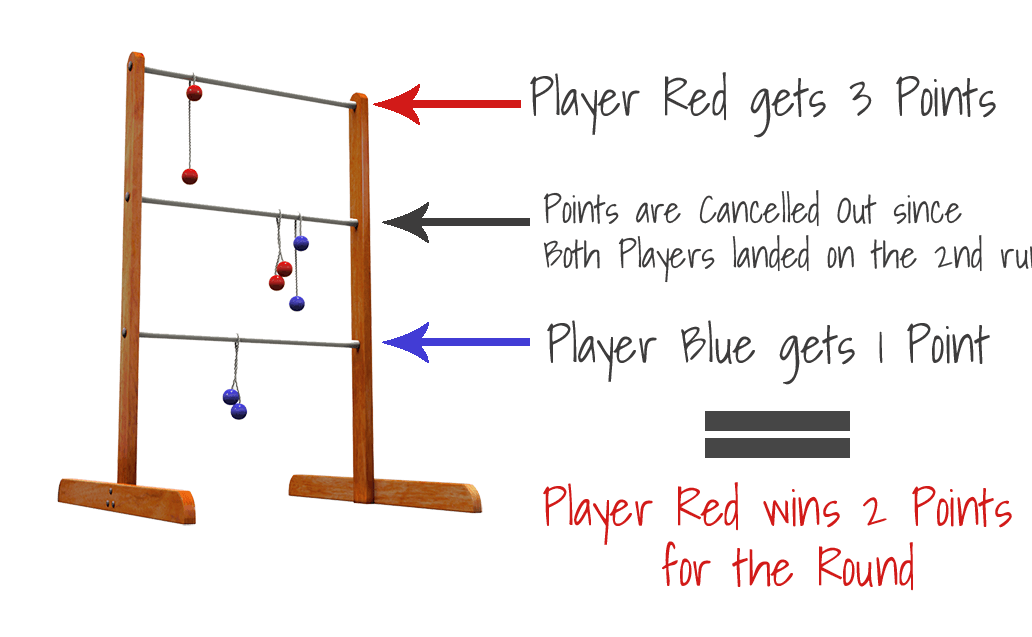 As you can see, if both teams get close to the same score it can make it challenging.  If can also be a fast game if one person gets lucky and wraps 3 Bolas around the top row for a total of 9 points.  It’s harder to aim for the top row so this attempt can be a risky play.

Beware, it is possible for your piece to fall or slide off when another Bola lands on that same rung, so the round isn’t over till it’s over.

The game is won when the first player or first team reaches 12 or 21.

We have also found Ladderball to be a fun game with a cup in hand and make it a drinking game.  Get the latest price. 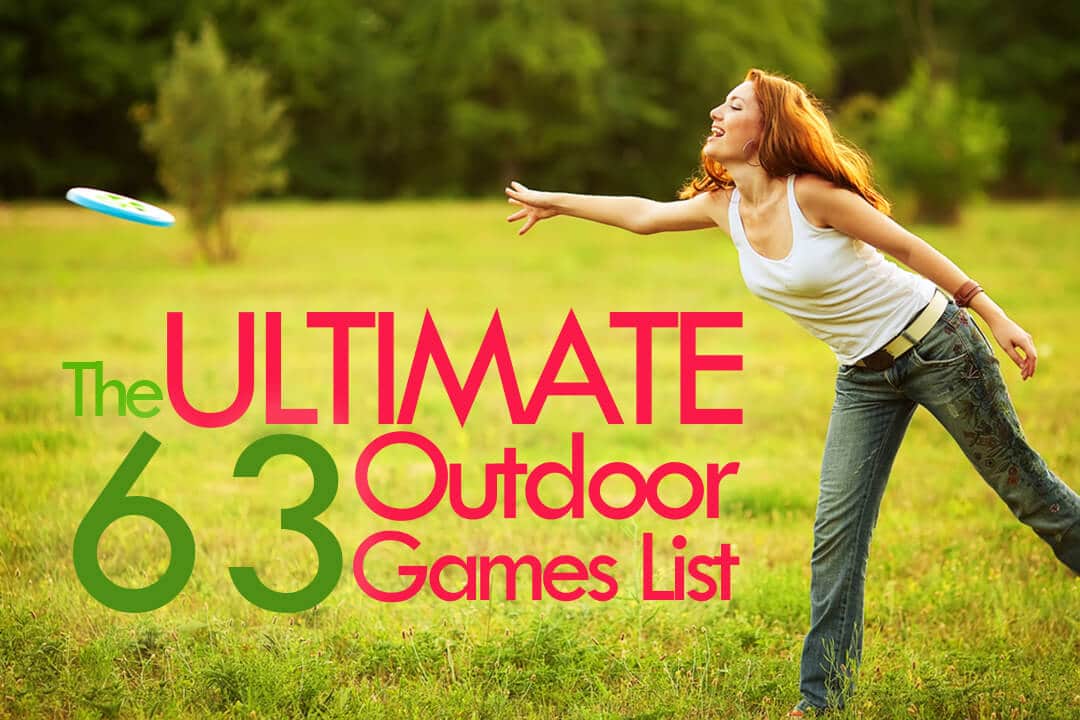 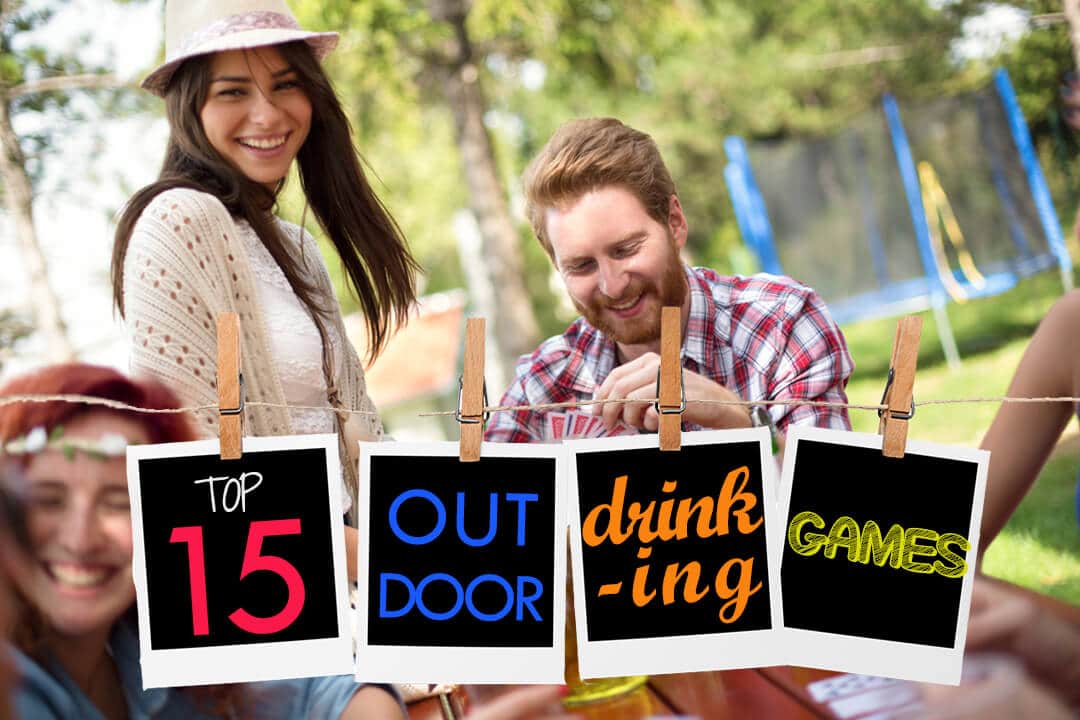 Game description: Ladderball is a simple game with 2 ladder goal posts and a bolla to aim at each ladder run, equalling different points.