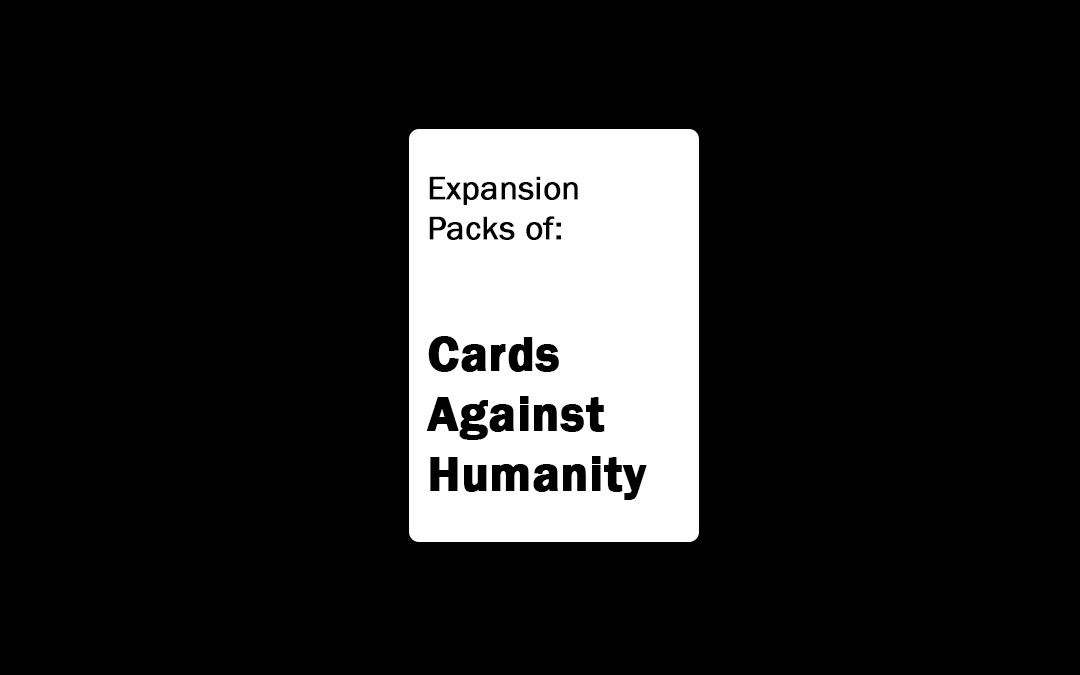 C ards Against Humanity is one the most popular card games for horrible people and for good reason. Most likely if you are searching for the expansion packs you’re a horrible person who loves the game as much as we have. After playing it 10+ times you tend to see the same cards, so it’s time to mix it up. Luckily there are 30+ different expansion packs for cards that make the original seem tame.  I also put together some ideas for games that are similar to Cards Against Humanity.

If you got this far and are not familiar with Cards Against Humanity. It is essentially a matching game.  Each round on player asks a question from a black card, and everyone else answers with their white card that they think the person will find the funniest. If your card is picked the most you win!

The Cards Against Humanity Base Pack

The expansion packs, even though most can be played on their own, need to be added to the original. Therefore, it is called an expansion pack, duh. The new 2.0 version is under $30 on Amazon and has 500 White Cards and 100 Black Cards.

The Cards Against Humanity Base Pack

The expansion packs, even though most can be played on their own, need to be added to the original. Therefore, it is called an expansion pack, duh. The new 2.0 version is under $30 on Amazon and has 500 White Cards and 100 Black Cards.

1. The Green Box (Our Personal Favorite)

The Green Box contains 300 new cards and is the biggest expansion for Cards Against Humanity. Well it is tied with several of them below, but nobody has more!  They quote this as it is the “their best cards ever… making your life worth living again”.  It contains more cards in heaven and earth, and some just down right weird ones. These 300 new cards needs to be played with the original.  Click here to get the price.

Just to give you a few cards in the Cards Against Humanity Green Box includes:

The Red Box contains the exact same cards as the 1-3 expansion packs that we mentioned above. There are no new cards, but you can be guaranteed for some laughs. Get the price.

A few of the cards within this deck include:

A few of the cards you can expect in here include:

The funny thing about this pack, is that it clearly states it is just a box. However, it has hundreds of reviews confused buyers for why this pack didn’t have any cards in it. The team at Cards Against Humanity does a really good job in calling them out stating that this is a storage container for up to 2500 cards, and they could not have made it any easier or clearer to explain.  Get the price.

Because of this back story, they do include 50 blank cards and some surprises, so if you are like us and do not want to show up with 4 different boxes you can consolidate them into this.

For the bigger, blacker box, a few of the cards include:

Not a lot of people can market a game and get away with calling it the Period Pack. This is because it is 30 special cards, their most absorbent pack yet. These cards were written while the ladies at the company were on their periods. The cards come lightly scented to help reduce odors (not joking) and is recommended to play ever 25-35 days with the original base set. Instead of telling you all the cards on this expansion pack, we thought it would be best if you imagine or buy your own copy here.

The Cards Against Humanity College Pack expansion is designed to help you remember the glory days when all you ate was Mr. Noodle and had sex all the time.  It even comes with a special poster for your dorm room or closest to remember the good ole days. It has 30 brand new cards about learning and throwing up. This pack highly suggests you break up with your high school boyfriend and you should order one here.

Seeing that I was born in the 1980’s this expansion pack both speaks to me, and kind of makes me feel old. I think of part Simpson and “don’t have a cow man” and hilariously ugly styles that surrounded us. This is another 30-card nostalgic pack that has some of the best jokes someone who lived through this can only get. Get the latest price.

A few of the cards include:

This is one expansion pack that really resonated with my life for so many years, unfortunately I keep forgetting what cards were in it. I would assume that it was 30 cards around weed and different names for it. Possibly about munchies and finding the nearest taco bell.  Get the price here.

The food expansion pack would go well with the Weed pack in our last example. I mean who does not love food?  However, they do like to make fun of the food that we eat in the United States and how much we eat of it. Get the latest price.

A few of the 30 cards you get in this expansion pack include:

After seeing these cards let’s just say that there was no way I could write them on here. Luckily for you, that 100% of the writers at Cards Against Humanity are Jewish and can make fun of themselves. Hard to believe, a Jewish comedy writer?  Ha.  View 30 of the best cards their big brains spit out full of real truths and sadness.  Get the price.

The Fantasy pack is pretty much a spoof on some of the most successful and popular movies of all time. I am the friend you do not want to play this with, who barely has seen any popular fantasy movies.  The Fantasy Pack entails famous references most other people will get. Get the price.

Here a few of the 32 cards you get from this pack:

Red Alert! The Sci-Fi nerds in all of us have detected 30 new cards. Get the price.

A few of the cards you will detect in this expansion pack include:

The title of this expansion pack really speaks for itself! This 30-card pack is all about Bazinga’s, Video Games, D&D, Games of Thrones, and Other things our dorky self love. Feel free to add a little Geek to all the horrible Cards Against Humanity classic cards.  Get the price.

The Science Pack is a fun mix to add into the game, also to see how reads books among your friends. The 30 hilarious cards have theories on evolution, global warming, and the far and distant planet of Uranus.  Get the price.

The hardest part about the World Wide Web Pack must have been choosing only 30 cards from the hundreds of thousands of possibilities. I mean beside the few untrue stories and adult films you can find; the internet has a lot of great inventions. Get the price.

A few examples of these great cards that was written anomalously from users of reddit include:

Are you the type of person that normally laughs at your own jokes?  If so, you are going to love the Your Crappy Joke Expansion Pack. It is 50 blank cards, so you can write your attempt at your humor for the game. This expansion pack includes instructions in hopes that your cards do not suck too much. BJ Robot anyone? Get the price.

Christmas is the time that you should be spent with family or playing outrageous card games with friends. The Team at Cards Against Humanity have launched 3 different expansion packs for these memorable occasions. After playing this game, you may be subject to receiving coal for the next few years. There is the 2012, 2013, and 2014 Holiday Packs or get the unofficial Humanity Hates the Holidays.

These holiday themed cards include:

Want to try a different awesome game?  Read these articles: 20+ Cards Against Humanity Expansion Packs and Where to Buy Them